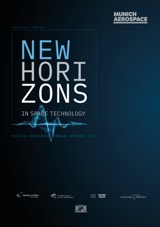 4 May 2020 - The Munich Aerospace member instituions Technical University of Munich (TUM) and German Aerospace Center (DLR) have been successful in the competition “International Future Labs for Artificial Intelligence” of the German Federal Ministry of Education and Research (BMBF). The new Future Lab, AI4EO, is launching in May 2020 under TUM leadership and will be funded with up to 5 million Euros. Satellite data and Big Data analyses will be used to create models of global urbanization, food supplies and the management of natural disasters.

The purpose of the international Future Labs: bringing together top international scientists to tackle some of the biggest questions currently facing AI researchers. In March 2019, Germany’s Federal Ministry of Education and Research, the BMBF, launched its grant competition.

The BMBF has awarded grant funding to three winning projects across Germany, including the “Artificial Intelligence for Earth Observation: Reasoning, Uncertainties, Ethics and Beyond (AI4EO)” Lab. TUM will helm the project, with the German Aerospace Center (DLR) as a close research partner.

What are the development trends in global urbanization, and how many humans worldwide are currently living in slums? Where are major environmental changes occurring? To answer these kinds of questions, researchers often utilize satellite data. With the amount of data being gathered by satellites having grown significantly in the meantime, researchers are now harnessing AI as the best way to process the data to derive the specific nuggets of information they need.

For example, satellite observation of a certain geographical area over a longer time period could reveal developments or changes either resulting from or driving politics and policymaking.

The Future Lab AI4EO is bringing together 27 researchers from 20 international organizations across nine countries to drive the development of AI earth observation technologies. “The goal of the Future Lab AI4EO is to consolidate Germany’s pole position in this field,” says Prof. Xiaoxiang Zhu, who is serving as the Lab’s director. To realize this goal, members of the research team will be taking a holistic and interdisciplinary approach – not only to develop new methods for earth observation, but to answer fundamental questions about the reliability and accuracy of AI technologies.

Technological advancements being made in the field of AI are also raising ethical questions, which will be another focal point of research for the Future Lab team. When information is available to the public, it could, for example, serve to prevent forest fires, improve the sustainability of cities or allow for the better management of slum areas. However, it will be important to balance the benefits of public data against potential abuse or misuse. As technology allows for ever-higher image resolution, ensuring the protection of individual data and privacy is also of paramount importance.

“In the new Future Lab, we can combine the strengths of TUM in earth observation, geodesy, satellite technology, space exploration, mathematics and ethics research and use the potential of artificial intelligence specifically for the benefit of mankind,” says TUM President Thomas F. Hofmann. “This is a great success of the synergetic bundling of competence by the new Department for Aerospace and Geodesy (LRG), which was founded as part of Bavaria’s High Tech Agenda. It is the heart of the Munich metropolitan region’s “Space Valley.”